LCpl Emily McClean left The Ladies' College in 2016 to join the Royal Marines service.  She plays the French horn and is part of the RM Band Plymouth. The band members are fully trained operational military personnel who undertake a wide variety of ceremonial work of national importance, as well as fulfilling its main role of providing music for the ships and establishments of the Royal Navy.  She was one of three Guernsey musicians who were honoured and humbled to be a part of the procession that played at the Duke of Edinburgh’s funeral.

We caught up with Emily to find out more  -

How long have you been a member of the Royal Marines Band Service?

I joined the Royal Marines Band Service in September 2016 and have been a member for 4 years.

What did you have to do in order to join?

I needed to be able to play an instrument (or sing) to a good standard (roughly ABRSM grade 5 or above) and make an online application via the Royal Navy’s website. I then took the Naval Service Recruitment Test, had a medical and eye test and received an interview. Upon successful completion of these elements, I attended a five-day audition which contained physical fitness tests, an interview and being evaluated on your own instrument, as well as other instruments you may not have played before, to see your potential.

What A-levels did you take at The Ladies' College?

What is your favourite memory from your time at The Ladies' College?

Some of my favourite memories include Maths lessons with Mr Hill, because of his quick wit and well observed comments, and the music trips to Prague and Venice, where we were incredibly lucky to sing in Saint Mark’s Basilica.

Which house were you in?

I was in Carey house.

What have been the highlights of your time with the Royal Marines?

Some of my highlights include playing at the NATO headquarters in Brussels, playing at the 2019 Island Games Opening Ceremony in Gibraltar, and performing at the Royal Albert Hall for the Mountbatten Festival of Music in 2020.

We do 15 weeks of Phase 1 Initial Military Training at Commando Training Centre Royal Marines, in Lympstone, which teaches you the practical skills you need to become an effective member of the wider Royal Marines team. This involves physical tests and basic soldiering, including rifle skills, map reading, CBRN decontamination and first aid.

How did you feel when you heard you would be playing at the funeral of HRH Prince Philip?

I felt very lucky and honoured to have been tasked to play as part of the Massed bands.

How long did the band rehearse for before the ceremony?

We began rehearsals at Pirbright four days before the ceremony and this included a full dress rehearsal at Windsor Castle.

What do you think the music added to the ceremony?

I think the music expressed the sense of loss felt by the nation in its time of mourning and allowed the public and those involved with the funeral to reflect upon HRH Duke of Edinburgh’s life of duty and service.

What music did the band play?

We marched up to Windsor Castle playing Army and Marine and Soldiers of the Sea. We entered the quadrangle playing The Captain General. As the massed bands, we played ‘I Vow to Thee My Country’, ‘Solemn Melody’, ‘Jerusalem’, ‘Isle of Beauty’ and ‘Nimrod’.

Was it an emotional experience for you and your colleagues?

It was a sad day for the Royal Marines as the Duke of Edinburgh was our Captain General Royal Marines for over 64 years, but it made us feel very proud and honoured to represent the Corps and to have been part of such an important occasion. There were also feelings of condolence and empathy for the Royal Family as they had lost a relative, which everyone understands, is very difficult.

What advice would you give to students at The Ladies' College who might be considering a career as a Royal Marines musician?

I would recommend students to apply for a ‘Look at Life Course’ which gives potential applicants a brief look into what we do day to day and also has elements of physical fitness to give a taster of what basic training can involve. I did this as part of my work experience in Upper 5th. I’d also encourage students to attend a concert or parade to see what we do and finally, to contact our Public Engagement team if they have any questions at all about the Royal Marines Band Service. You can also follow us on all the major social media platforms. 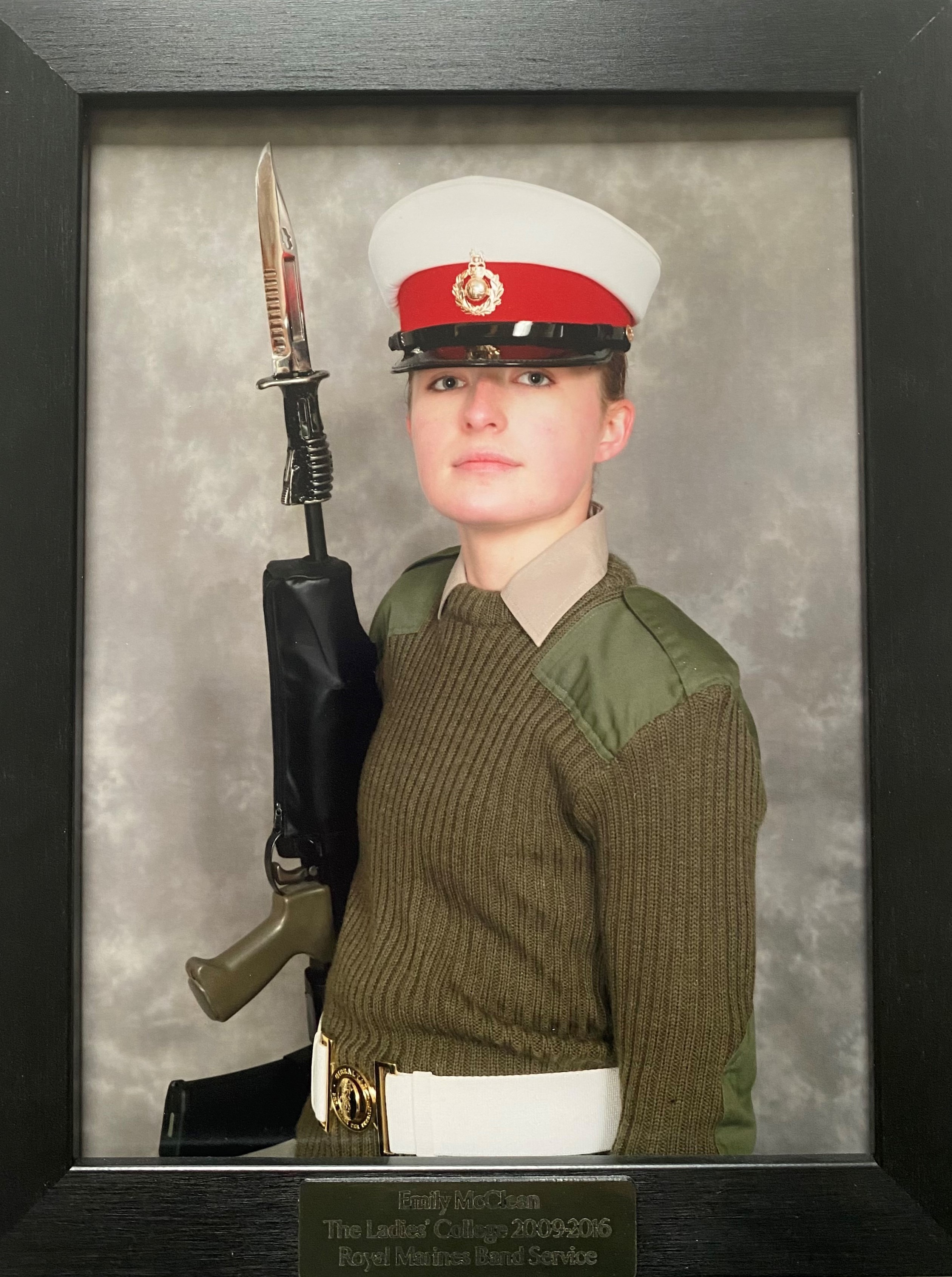 The annual commemoration service was led at the end of term on October 21st by Mrs Henderson. More... Announcement of the New Principal

The Ladies' College, Guernsey is delighted to announce that Ms Daniele Harford-Fox has been appointed as the next Princi… More...